Iowa farmers get big break with good harvest, high prices. But will their luck hold? 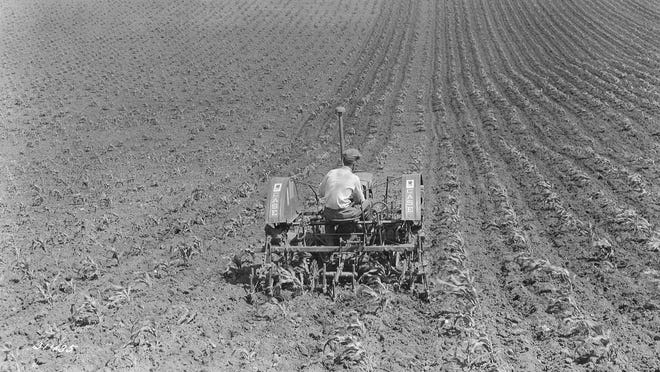 Randy Miller rolled his Deere combine through a corn field recently, surprised at the numbers on his monitor. The central Iowa corn and soybean farmer saw yields that were close to his best.

The outlook was much different in late June, when Miller told his agronomist to hold off spreading fertilizer, concerned he might not have a corn crop if he didn't get a shot of rain soon. It didn't make sense to spend more money on a crop that was starved for moisture.

"We were 10 days from not getting a crop," said Miller, president-elect of the Iowa Soybean Association's board of directors.

The rains came just in time for Miller and for many other farmers across Iowa, who endured weeks of drought during a prime part of the growing season. Somehow, there was just enough moisture to keep their crops producing.

"Every time I worried about the crop, we got a little bit of rain to keep us going," said Meaghan Anderson, an Iowa State University Extension agronomist. "It was like we were spoon-feeding the crops. It was well-timed."

After last year's destructive derecho, which flattened corn and stripped soybean across the state, better-than-expected yields and strong prices are making this harvest a profitable one for Iowa farmers lucky enough to have gotten the much-needed rain. And it's helping to offset concerns about rising production costs and possible supply shortages for next year's growing season.

At the same time, corn and soybean prices are among some of the best in recent years. Corn prices averaged $6.38 a bushel for Iowa farmers in August, more than double the price a year earlier, agriculture department data show. At $13.70 a bushel, average soybean prices were 60% higher in August than a year earlier.

Concerns about the drought stopped Mike Penick from selling much of his crop before this year's harvest.

"I didn’t get real aggressive because of the dry weather," said Penick, who grows corn and soybeans near Indianola. "The way things look right now, I can't complain about the prices."

Even with rain alleviating some drought concerns in northwest Iowa, almost 60% of the state continues to be in moderate or severe drought, the U.S. Drought Monitor shows. Some areas in Iowa are 8-10 inches behind average annual precipitation, said Dennis Todey, director of the agriculture department's Midwest Climate Hub in Ames.

"I'd like it if we saw two or three of these (storm) systems this fall," he said.

In addition to concerns about whether the drought will linger into next season, farmers are watching rising prices for land, seed and fertilizer, as well as and other expenses. U.S. production costs are estimated to be 7% higher this year and next year's could match the national record set in 2014, some experts and farmers say.

"It's a two-edged sword," said Penick, whose family may be best known for growing sweet corn in central Iowa. "When we get good prices, everything else goes up.

"Fertilizer went up almost 75%," he said. "That takes about all the benefit of the higher (commodity) prices out of the equation."

Shortage of computer chips, parts, even fertilizer, a 'pressing issue'

Penick was about 30 miles into a 170-mile trip to Illinois to pick up a needed hydraulics part in October when his dealer called and told him he'd found one in central Iowa.

"It's been a bear-cat finding parts," Pennick said.

Chris Edgington, who farms in northern Iowa, was waiting for a shaft he needed to repair a combine. His dealer was looking across the nation.

"There's definitely a shortage of parts," said Edgington, who raises corn and soybeans near St. Ansgar in Mitchell County.

Edgington, president of the National Corn Growers Association's board, points to hundreds of Case IH tractors sitting outside a Nebraska plant, waiting for parts before they can be shipped to dealers.

Just like the automobile industry, tractor manufacturers are suffering from shortages that include computer chips, which help control control everything from engines to planting to spraying. Supplies fell to critically low levels after pandemic-related plant shutdowns and a surge in demand for consumer electronics.

"It's not just a chip shortage for car manufacturers," Edgington said.

Anderson, the ISU agronomist, said a supplier told her family, which farms in Iowa, that they had received one of only 20 computer components available nationwide for their broken combine.

"That's an absolutely serious and pressing issue ... if you have an equipment issue that takes you down and you have to sit and wait," Anderson said. "You never know what the weather will do."

Farmers also are being warned that some herbicides may not be available for next year's crop, Anderson said.

"They're putting in orders and hoping that supplies are there" in the spring, she said.

Some farmers say they're doing the same with fertilizers. Natural disasters cut nitrogen supplies, for example, while costs for natural gas, used to make the fertilizer, have spiked.

More:Natural gas customers that heating bills in Iowa could nearly double this winter

Machinery sitting on dealers' lots is "pretty sparse right now — for both new and used equipment," he said.

Tight supplies mean prices are climbing. "Prices have gone up sharply ... across the board,"  Blades said, though he added that with multiple manufacturers, it's difficult to quantify the increase.

The demand is reflected in profits for farm equipment manufacturers like Deere & Co. The Moline, Illinois, company reported in August it earned $4.7 billion for the first nine months of its fiscal year, already more than its record full-year earnings of $3.5 billion in 2013.

Higher corn and soybean prices have helped drive demand for tractors, combines, sprayers and planters, Blades said. U.S. farm income this year is forecast to be 19% higher at $113 billion, the highest level since hitting a record in 2013. Income for Iowa farmers in 2020, the most recent data available, climbed 26% to $3.5 billion.

"Farmers are more optimistic this year, and it has a lot to do with prices," said Edgington, the north Iowa farmer.

"If you have a decent crop and you can get it to the bin, you should have decent margins," he said. But "the whole thing will be more expensive in 2022."

The largely successful harvest is at odds with what experts had been worried about this year, when government assistance was expected to decline to $28 billion. It had hit a record high last year at $45.7 billion, primarily helping farmers hard-hit with pandemic market disruptions. That was about 40% of last year's net farm income.

Improvements this year in corn, soybean and other commodity prices have "more than offset the loss of the government support," said Chad Hart, an Iowa State University agriculture economist.

Even with fertilizer, land, seed and other costs rising, next year should be profitable as well, he said. Corn prices for next year's crop are sitting around $5.20 a bushel, based on futures prices, and Hart estimates production costs will be around $4.40.

Still, farmers are concerned about the rapidly growing cost of one of their biggest expenses: Land.

Earlier this month, an investor paid an unprecedented $26,000 an acre for a 76-acre eastern Iowa farm just south of Cedar Rapids, bringing the total cost to nearly $2 million. And a farmer bought another 76 acres that was part of the sale for $21,000 an acre, with total price tag near $1.6 million.

In a somewhat ironic observation, Kay said investors concerned about inflation are driving the rise in prices.

"We’re hearing a lot of buyers worried about money sitting in banks being worth a lot less," he said, "and they’re putting it into land, even though it’s at a high cost."

Miller, the Iowa soybean board leader, said rising land values help improve farmers' balance sheets, with higher-value assets. But it also makes it difficult for young farmers to get started. His son, an Iowa State University grad, is raising hogs in addition to helping his dad farm.

"It's tough to get a foot in the door," said Miller, who also runs a cow-calf herd and feeds nursery pigs, raising them from about 14 pounds to about 50 pounds for another producer.

Still, the big harvest and good prices are helping farmers recover from some financially turbulent years. Miller already has locked in corn and soybean prices that he knows will be profitable for him. He also will store some of this year's grain so he can take advantage of prices if they climb more.

"I'm not trying to hit home runs," catching commodity prices at their peak, Miller said. "I'm a first-generation farmer. And if I lock in a profit, I get to farm next year."

Donnelle Eller covers agriculture, the environment and energy for the Register. Reach her at deller@registermedia.com or 515-284-8457.